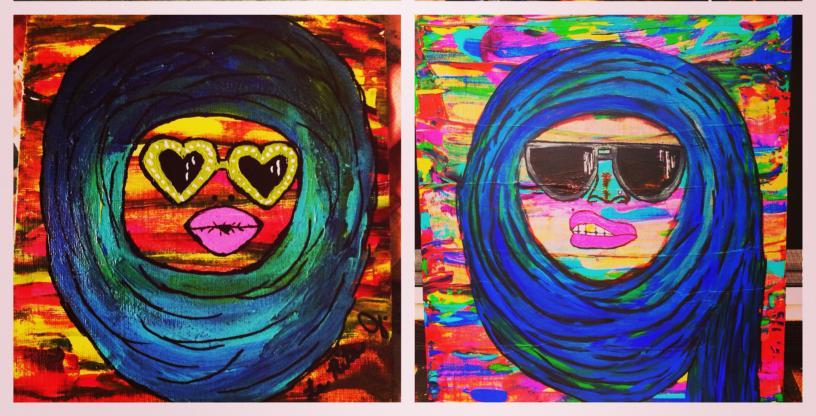 It’s not about the Burqa (editor Mariam Khan) is a collection of 17 essays written by a diverse group of Muslim women who are not ashamed of saying what they think and feel. In fact, this book unapologetically challenges the stereotypes projected onto Muslim women and the media’s portrayal of them. A refreshing collection of insightful, inspiring and honest stories give the reader a glimpse of what it is like to be a Muslim woman in an ever growing Islamophobic, racist and misogynistic world.

This book comes at a particularly important time when only last year Boris Johnson wrote in the telegraph, “If you tell me that the burka is oppressive, then I am with you. If you say that it is weird and bullying to expect women to cover their faces, then I totally agree”. He goes onto say, “I would go further and say that it is absolutely ridiculous that people should choose to go around looking like letter boxes”. Tell MAMA, a national independent anti-Muslim hatred project, report that in the week following publication of this article, abuse incidents jumped by 375%, and more than half of these attacks were directed at Muslim women who wore the niqab. This is not the first time Muslim women have been at the forefront of sexist and Islamophobic remarks from white middle class men. In 2016 David Cameron linked the radicalisation of Muslim men to the “traditional submissiveness of Muslim women”.

We Muslim women do not need these types of comments being made from those in power. In these comments, I hear white men in power dehumanising and humiliating Muslim women, and a need to control them – ironically something Muslim men are accused of doing. Not only are these comments dangerous, but they are derogatory, offensive and degrading – what better way to make a minority group feel even more disempowered? And what better way to drip-feed the public an Islamophobic and misogynistic agenda.

In fact, I wonder whether the burqa or hijab has become a symbol to white men in power that Muslim women choose not to be sexualised or buy into the global capitalistic agenda which is supported by the fashion industry. I wonder if the sexualisation of the hijab through the fashion industry is a way to seduce Muslim women back into the control of the white men who run the show. Afia Ahmed discusses this and the impact of a multimillion-dollar industry now dedicated to hijabi fashion in It’s not about the Burqa.

I am not denying that some women are coerced into wearing the hijab or burka when they do not want to; this is a clear form of domestic abuse. I also do not wish to open up a debate about what Muslim women should be allowed to do and not do because even by asking that question, I am assuming that the question is up for debate which it is not. What It’s not about the Burqa does, is that it boldly invites us into the world of many different Muslim women who do not fit into the stereotype of being “submissive” and dispels the myths of Islam being oppressive to women. Aina Khan a family lawyer says:

“In Islam, a woman can keep her own property, her earnings, and even her own name after marriage. Although in an Arabic, Asian or African context, a man has full control over his wife, Islam asks women to stand on their own feet within a marriage contract. If she wants tafweed (an equal right to divorce), she can put it in the marriage contract. If she does not want her husband to take another wife, she makes that a condition. If she wants maintenance after divorce, she can stipulate that to protect herself.” (p195)

There is no doubt that misogyny and sexism exist within the Muslim community and this has prevented Muslim women from knowing their rights and therefore being able to exercise their equality within Islam. However, we cannot underestimate the power of the political agenda reinforced by the likes of Boris Johnson – that Muslim women are submissive, oppressed and passive. A great example of how wrong this stereotype can be, is depicted in another great essay written by journalist Salma Haidrani, who writes:

“I was hoping to shed light on the limited opportunities for Muslim women in the UK to explore their sexuality when most mainstream sex shops – which often have explicit store fronts – could be intimidating for them. I hoped that readers would recognise just how far the UK’s first halal sex shop, which offered a nudity-free buying experience, could service to empower Muslim women. I was the first person in the UK to profile the halal sex shop in depth” (p128).

Now that does not sound like a submissive Muslim woman to me! One of my favourite essays in It’s not about the Burqa is written by Sufiya Ahmed who writes about the prophet’s Muhammed’s first wife Khadija who “sowed the seeds of feminism” in her mind. Khadija was a businesswoman 15 years older than the prophet who “was the wealthiest merchant in Mecca, and was known as Al-Tahira, the Pure One, for her honesty and integrity” (p31). This essay is a good reminder that feminism is not a western concept ‘discovered’ by white western women – just like Columbus did not ‘discover’ the Americas. This book importantly reminds us that Muslim women and Islam are presented to us in the western world through an Islamophobic, misogynistic and racist lens. Therefore, it is important to share as many Muslim voices as possible to challenge this archaic and frankly quite boring rhetoric.

What this book made me realise, was that we Muslim women are not celebrated as much as our non-Muslim counterparts. Not only do we face Islamophobia and racism, but we also face misogyny inside and outside our communities. Social media reflects this bias and perpetuates the stereotypes of Muslim women being submissive and oppressed. I challenge this perception of Muslim women and want to start celebrating the many achievements of Muslim women which go unrecognised and overlooked in the world.

In support of raising awareness and celebrating Muslim women worldwide, I will be sharing a daily social media post of different Muslim women who have inspired me and enriched my life. And I am also inviting you to share a story of an inspirational  Muslim woman on social media using #MuslimWomenHeroes. Make it go far and wide, so that everyone is exposed to more positive stories of Muslim women, because Lord only knows that us women make a massive difference this world.

Burqa/Burka – outer piece of clothing that covers the body and face, with a mesh grill or window across the eyes.

Hijab – meaning “partition’ or ‘curtain’, colloquially used to refer to a scarf that covers the head

Niqab – a veil worn by some Muslim women in public, covering all of the face apart from the eyes.